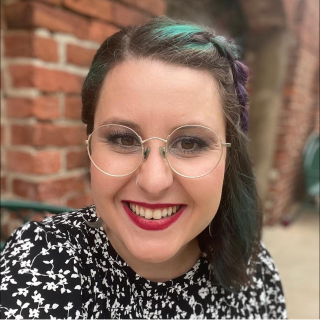 The Church Has Left the Building

When We Get To It: In Defense of Our Youth

The Goddess Is a Southern Grandma

Hi friends! My name is Helen. The kiddos here at UUCT call me Mx. Helen, and my pronouns are they/them/theirs. Learning someone’s pronouns and how they identify is so important, it’s just like learning their name!

Shiloh is a Sea Pancake.

What’s that? You think Shiloh looks like a Stingray? I can see why you might think that. Allow me to explain.

Now, there’s nothing wrong with being a Stingray. Other creatures who look like Shiloh are called Stingray. Stingrays are pretty cool!

But you see, Shiloh just never felt like a Stingray.

Shiloh says they don’t like to be called a Stingray because their stinger is just one part of their body, not all of who they are. Shiloh also has smooth skin that helps them glide through the water and gills to help them breathe. These things are part of Shiloh’s body, but they don’t have much to do with who they are.

Shiloh likes to play tag, and their favorite kind of music is jazz. Shiloh’s best friend is a seahorse named Lilly, and Shiloh can’t stand how it feels when seaweed brushes against their skin. When Shiloh finds coins at the bottom of the sea that are face-down, they flip them over so that someone else can find them face up for good luck. Shiloh always sleeps with a special cozy toy, and their favorite color is yellow.

Shiloh would much rather be called a Sea Pancake than a Stingray, because “Sea Pancake” just feels more fun, more friendly, and just more like *them.* Being a Sea Pancake makes Shiloh feel good about themself.

When Shiloh is sad or worried, they talk to their best friend Lilly.

Lilly is a seahorse and has always felt like a seahorse, so Lilly doesn’t always know exactly how Shiloh feels. Lilly does care a lot about her friend Shiloh, though, so she always tries to be a good friend by learning from and listening to Shiloh. When Shiloh is upset, Lilly sometimes feels upset too.

When Shiloh is worried or sad, Lilly tries to remind them that there is nothing wrong with being a Sea Pancake. In fact, Lilly thinks that Sea Pancakes are pretty cool.

Lilly says Sea Pancakes are funny and adorable, and they see the world in a way that nobody else can. They have big smiles and loud giggles that they use to laugh at really silly jokes, which they often make themselves. They are kind and careful and considerate, and they stand up for what is right.

The most special thing about a Sea Pancake is the way that they treat others.

You see, becoming a Sea Pancake isn’t always easy. Others aren’t always nice when they don’t understand something, and often, others don’t understand why someone who was called a Stingray might really be a Sea Pancake. Because Sea Pancakes know this, they take extra care to be kind and compassionate toward others. They care about how others are feeling and make a point to consider how their actions might make others feel. This is the Sea Pancake’s superpower – they treat others as well as they possibly can, and in turn, those around them learn how to treat others well too. This way, Sea Pancakes can change the whole world.

But they can’t do it alone, and they might not always have the energy to explain to other creatures why they deserve to be respected for who they are. That’s why they need allies like Lilly, and like you, too!

So if you see my friend Shiloh, be sure to say hello. Give them a wave or tell them a silly joke. And if you see someone who looks like Shiloh, but you don’t know if they are a Sea Pancake or a Stingray, it’s ok to ask. The easiest way to ask is by introducing yourself first.

If you give them the chance, a Sea Pancake can teach you a lot about being a great friend! You might even learn something about making the world a kinder place.